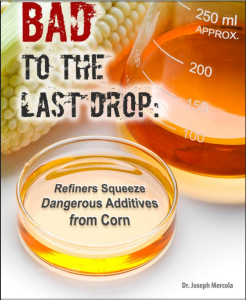 There is no shortage of sugar in the 21 doughnuts, candy, and sugary drinks, to the less obvious, which now include most every processed food on the shelf at the supermarket.

It is probably no mystery that sugar is not good for you as I have been documenting the scientific dangers of sugar for many years. In fact after reviewing the evidence of the damage sugar can cause, it is my firm belief that regular use of sugar is even worse for you than cigarettes.

Research has shown that the highly processed fructose in HFCS contributes far more to obesity and insulin resistance syndrome than simple table sugar.

In animal studies, fructose consumption was found to produce:

Consuming HFCS also contributes to fat deposits in your liver (fatty liver) and increases the buildup of dangerous lipoproteins, part of cholesterol deposits, in your blood vessel. This leads to plaque buildup and a narrowing of your blood vessels, which increase your susceptibility to both strokes and heart attacks.

While studies show that the average American’s consumption of fructose increased 26 percent from 1970 to 1997 and continued to increase until 2002, it declined the next year.

According to the USDA Yearbook, there was a drop from 44.7 pounds of consumption per year per person of HFCS in 2002, to 43.4 pounds in 2003. So it seems that educational efforts warning the public of this sweetener’s danger are starting to make a dent but there is a long way to go as HFCS is pervasive in many processed foods because it is cheap to use, which is partially related to its subsidy by the US government.