Apple Cider Vinegar is a superfood, able to tackle tasks from cleaning up mold and covering odors to spicing up a salad with ease. It is easy to make yourself, and can also be inexpensive from the grocery store in raw, organic versions with the mother.

Apple cider vinegar can be made at home with chunks, cores, and peels of apple, some sugar, water, and a mason jar covered in cheesecloth. It is a simple matter of allowing the apples to ferment and create bacteria, a process that takes about a month.

There are plenty of great recipes for making your own apple cider vinegar online, but if you are unable to there are also lots of resources for good ACV at your local grocery or health food store. If you’re buying ACV at the store, look for it packaged in glass bottles, raw with the mother. With the mother means that the bottle with have a cloudy mixture at the bottom of it, a collection of bacteria and enzymes that will continue enrich the vinegar throughout its life. 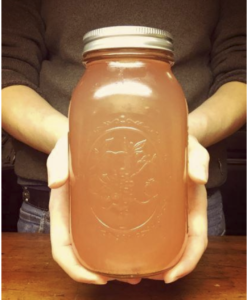 What can you use this amazing vinegar for? It is truly astonishing how many tasks ACV can help out with. Here are just a dozen of my favorites.

As a skin cleanser and toner. Because of its antiseptic properties, vinegar has always been a common recommendation for skin care. Apple cider vinegar in particular helps to regulate your skin’s pH levels, reducing inflammations and blemishes. Leaving skin feeling smooth and soft, ACV has been used to treat acne and psoriasis by some home remedy enthusiasts, and it will help to keep skin clear and even.

Pickling. One of the most well known uses for Apple Cider Vinegar is in the pickling of vegetables, particularly when making classic pickled recipes like dill pickles. Apple cider vinegar is a favorite for pickling because its flavors add some depth to the recipe but do not overwhelm the other spices in the mix. At five percent acetic acid, apple cider vinegar has just the right amount of acid for preserving vegetables.

Deodorizing. Apple Cider Vinegar can be used as an alternative to store-bought deodorants.  Pure ACV can be applied to the underarms with a washcloth, and when it dries it will absorb odors and also kill germs.  It is a much more healthy choice than deodorant sticks, and after an initial scent of pickles it will have almost no smell.

As a cleaning solution. Just like how it can neutralize under-arm smells, ACV can also tackle bad scents around the house. Diluted in water Apple Cider Vinegar provides a chemical-free alternative to expensive store bought cleaners, and it works just as well. It has a slight odor in application that disappears when it dries, it won’t leave streaks behind and it will cut through grime and grease with ease.

Fight colds and sore throats. I’ve known of apple cider vinegar as a ‘cure’ for the common cold since I was a child.  It’s an age-old remedy, but it is not an old wife’s tale. If you drink a tablespoon as your cold symptoms set in, it will help to battle the germs and set you on the path back to health. Its high levels of alkaline are why it is so good at warding off colds, and it also can be used to soothe a sore throat. Enjoyed with warm water and honey, ACV can feel pleasant on an irritated throat and it is also going to help loosen phlegm and mucus for easy breathing.

Catch fruit flies. Fruit flies are some of the most annoying and hard to combat household pests. They’re so tiny they are impossible to swat, but you can use Apple Cider Vinegar to create an effective trap for the little bugs. A quarter inch of Apple Cider Vinegar in a cup with a drop of soap, covered with a piece of paper or plastic wrap, will draw flies in and then not allow them to escape. An ACV trap can also be effective against larger house flies.

Hair care. Similar to how it clears and tones skin, apple cider vinegar can also keep hair clean and shining with health. The high acidity of ACV helps it to keep your hair healthy and porous, and it often helps to reduce tangles and make hair easy to comb. Apple cider vinegar can be used directly on your hair, or it can be mixed with other ingredients for a homemade, natural shampoo.

Weed killer. If you’re looking for a natural alternative to chemical rich weed killers, look no further than Apple Cider Vinegar. Straight ACV sprayed onto weeds will kill them and not damage the surrounding soil.  ACV is also much less expensive than most chemical weed killers, and it kills weeds because of its high acidity not because of other potentially harmful ingredients.

Combat fleas. Even more of a nuisance than fruit flies, fleas are hard to get rid of and cause skin irritation and itching for you and your pets. Once again Apple Cider Vinegar is a great, inexpensive and chemical free alternative to flea sprays which do not always work. A little bit of ACV in your pet’s drinking water, or mixed in when you bathe them, will help to prevent flea outbreaks. Using a topical spray of ACV and water, about half and half, will help get rid of fleas and you can apply the same spray around your house, especially against baseboards and on to carpets, to combat an infestation. The fact that ACV dries odorless means you do not have to worry about your home smelling like pickles all the time, either.

Stop hiccups. Since I was a kid my favorite way to use ACV is to combat hiccups. I’m prone to frequent hiccuping and it is often hard to stop even with traditional “cures” like holding your breath. Apple Cider Vinegar stops them in a very simple way: It is so tart and sour it simply distracts the brain, and hiccups subside. I may be in the minority, but I have always enjoyed the taste so a burst of hiccups seems almost like an excuse to enjoy some vinegar.

Tooth whiter and bad breath fighter. Just as it fights bad odors in the house and from your sweat, ACV will also help control bad breath. A tablespoon of ACV will help to combat bad odors in the mouth, and it also adds to your stomach’s natural acidity, aiding in the digestion of your food. At the same time, Apple Cider Vinegar can also help to keep your teeth white and shining. Gargling a mixture of ACV and water helps keep teeth pearly white and removes unsightly stains.

In your cooking. If you want to add ACV to your diet because of its many benefits, but you don’t like the taste of vinegar, there are hundreds of recipes that can use ACV as an important but not overwhelming ingredient. You do not have to just use Apple Cider Vinegar for pickling, it can also be part of a marinade, a salad dressing, deviled eggs, baked beans, and more. Drink recipes like fire cider and detox drinks use ACV as their base ingredient, and call for other super foods that help to keep your body healthy and fight off infections.

No matter where you use apple cider vinegar, there is no doubt of its incredible powers. Make some or pick some up at the grocery store, and you’ll be surprised how many ways you’ll be using it around your home.